I’m so happy to be finally posting. Not only am I posting, but I actually have something new and interesting to post about. When I started the blog, I just wanted a way to share all the fun and interesting recipes I tried as I was finally getting comfortable in my kitchen. Life of course as gotten in the way and lately I’ve been making the same old stuff over and over again, just thrilled to make anything at all.

However, I had a chance last Sunday to make something new. In fact, I was determined to make something new. And something with eggplant. My father in law has a huge garden, and every time we see him I end up getting a 5 gallon bucket full of produce. 2 weeks ago it was full of zucchini, butternut squash and eggplant. I think I’ve mentioned before that Brent is not the biggest fan of eggplant, but I wasn’t willing to let it go to waste. I considered some eggplant Parm, but I wanted something new, so I turned to Recipezaar.

After looking at the eggplant recipes, I decided to make Eggplant Meatballs, mostly because they just sounded so… out there, you know? I love weird sounding food. Brent of course, seemed dubious, but I had faith. They were somewhat time consuming to make, and I was a bit wary, but they actually turned out really well! 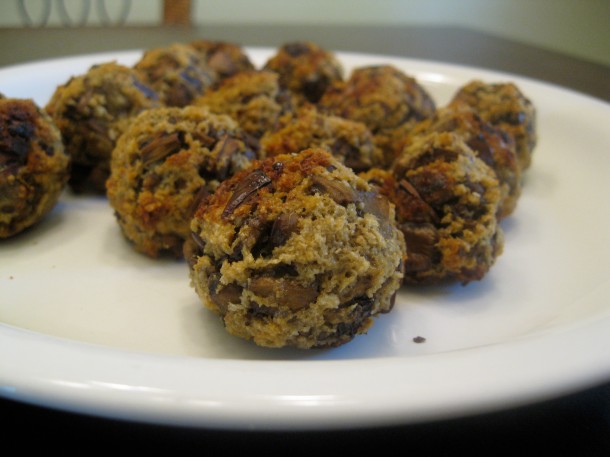 So maybe they’re not so gorgeous to look at, but they were pretty tasty. Don’t get me wrong — I don’t think anyone would actually think these were made of meat, but they were savory and went really well with marinara sauce. It was nice to bulk up my spaghetti, and best of all, Brent liked them! The man who does not care for eggplant said he would definitely eat it again in this form.

Because of the time involved, I think I would make a double batch next time and try freezing some of these “meatballs” for later use.

I also took some dog photos. Everytime we have a showing on our house, we have to leave with the dogs for like an hour, so I like to take them to this small dog park in our old apartment complex. They seem to enjoy it. 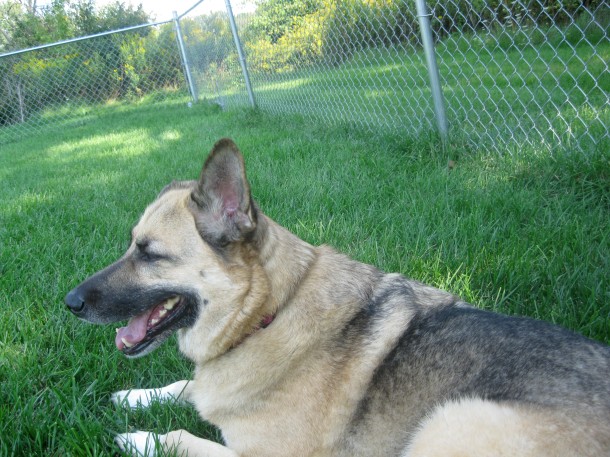 Posted in Uncategorized and tagged Eggplant, Pasta. Bookmark the permalink.

This has been another busy week, but my first few exams are over, the house is officially on the market, and my weekend started 5 hours ago so I’m feeling pretty calm right now. I also actually cooked dinner. It’s a shame how unusual that’s becoming.

Tonight my main focus was using up the large quantity of vegetables my father in law brought over on Sunday. We had around 5lbs. of tomatoes, a few eggplants and some zucchini. I decided to oven roast everything and throw it on top of some pasta. The tomatoes went in first, quartered and drizzled with olive oil, garlic, rosemary, salt and pepper. They cooked at 350 for about an hour and a half. Next I threw in a pan of cubed zucchini and eggplant, again with olive oil, salt and pepper. I cooked that at 400 for 30 minutes, but during the last 10 minutes I also tossed in some sliced mushrooms I had in the fridge.

Once all of it was done roasting, I smashed up the tomatoes a bit and tossed with some cooked pasta. I sprinkled everything with some fresh basil and Parmesan. 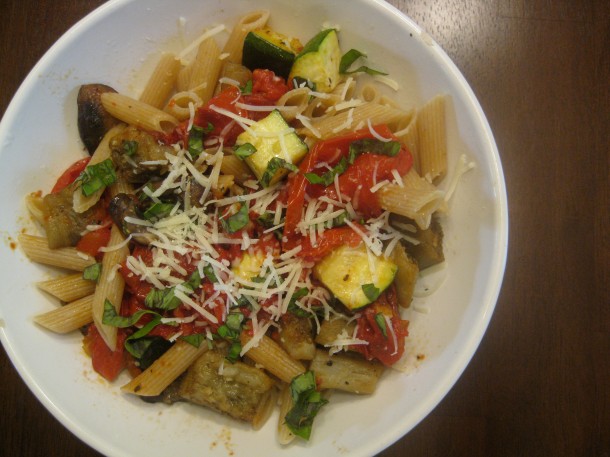 I thought this was really good. The veggies probably didn’t even need any pasta, and it reminded me quite a bit of ratatouille (thus, the post title). I love meals made in the oven. This took 2 hours or so to prepare but all of it inactive so it was super simple. Thank goodness I used up those veggies because we brought home another bag full last night from our CSA. 🙂

We spent a lot of Saturday out of the house running errands at the mall, and a very exciting trip to the dog park! We used to take Lucy to the dog park in Redondo Beach all the time because we didn’t have a back yard, but Larry has never been to one. I was a bit nervous to see how the trip would play out since it was all new to Larry and Lucy, well… Lucy can be picky about the dogs she likes so it can be kind of a crap shoot.

Luckily both of them really had a lot of fun and they even met a new friend — Charlie the Beagle.

I think this might be the only photo in existence of Lucy actually running. It’s a pretty rare occurence. 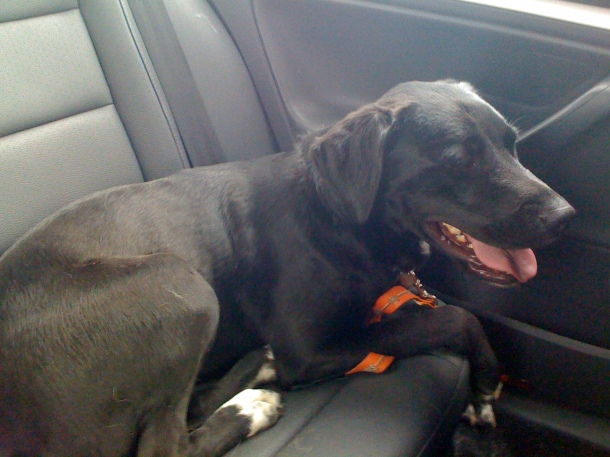 The car ride back is always much calmer. I love when they’re pooped out.

After our busy day running around, I wasn’t feeling like making something for dinner, but I knew I had food to use up so I went with pizza. Pizza seemed like a good way to use those adorable eggplants, so I decided to make Eggplant Parmesan Pizza. I made some marinara sauce with a can of tomatoes and layered that on top of the dough. I topped the sauce with thin slices of grilled eggplant.

Then sprinkled with mozzarella, Parmesan and chopped basil. I really loved it!

Hope you all had a great weekend! Now I’m off to relax and enjoy the rest of my Sunday evening before Monday morning rolls around.

I’d been trying to figure out a delightfully easy way to say this, but I haven’t come up with one, so I guess I’ll just go ahead and say it. I’m not actually the culinary goddess I’m made myself out to be; not even a little bit. Case in point: last night’s Eggplant Parmesan. 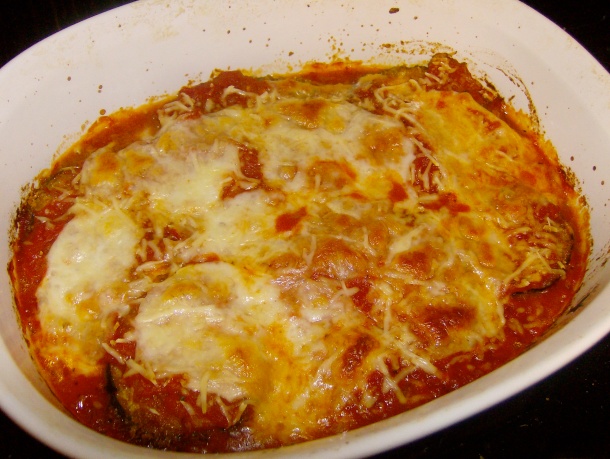 It looks fine. I know it does. How could it not? It’s covered in delicious cheese and baked to an amazing degree of simultaneously gooey and crispy goodness. Underneath all that cheese, however, is a gross, greasy layer of disintegrating eggplant mush.

I am am very Not Good at a few specific things. Chief among them are cooking eggs in any way, shape or form, and frying things. The latter is a recently discovered flaw. I guess the eggplant just soaked up too much oil, or the oil wasn’t hot enough, or I didn’t drain them enough, or one of the other multitude of hiccups that can occur when undertaking such adventures.

For the record, Brent willingly ate the entire thing. His reaction, “It’s fine hon. The eggplant actually disappears in the whole equation.”

All in all, Eggplant Parmesan is on the list of things to try again, albeit with a slightly different preparation method.

Posted in Uncategorized and tagged Cheese, Eggplant. Bookmark the permalink.