For the past month or two, I’ve really been on a granola making kick, making it once a week and eating it every morning with yogurt and fruit. It’s just so easy! However, I’ve been pretty boring with it: honey, canola oil, brown sugar, oats, nuts, raisins, and if I’m feeling crazy maybe some coconut. This week I decided to change it up a bit. (Although I don’t know why I bother, Brent didn’t even notice!)

This afternoon, I made peanut butter granola — and I loved it! The peanut butter flavor isn’t overwhelming, and it’s actually more like an undertone. I enjoyed that this was less sweet than my usually granola, and a bit salty, because I use Smucker’s Natural PB, which has a bit of salt in it. It also has big peanut buttery clusters!

I’ve noticed granola recipes are either a higher temp and shorter cooking time, or lower and slower. I use the lower and slower method, but you could probably just use the same ingredients and cook it according to your normal method. This makes a ton, like 8 cups or so. Feel free to halve it.

I came across a few sites featuring homemade granola yesterday, and I felt compelled to make my own.

I followed Alton Brown’s Granola recipe, but used walnuts instead of cashews, and used half honey, half maple syrup. It is extremely tasty, and the low and slow method gave it really great crunch. I do wish it had a bit more clusters, but I love it. And it made a ton! I had a really filling bowl of it for breakfast, which I’m hoping holds me over for 5 hours or so.

On an unrelated note, my arms, especially my shoulders, are so sore! That yoga really killed me yesterday. I definitely need a slow, gentle, stretchy one today.

Hope everyone is having a decent Monday morning!

I always get excited about Friday, although normally my weekends aren’t all that different from the weekdays. I study. I clean. I watch Netflix with Brent. What makes this Friday particularly exciting is that we have a date tonight! We’re going to Catablu, a locally owned restaurant, which has no website. I have gotten a look at part of their menu, including lobster mac ‘n cheese! I’m really looking forward to it. Also, I finished all my required school work, and because next week is spring break, I’ve decided not to do any cleaning or studying this weekend! We’re going to have a mini stay-cation this weekend. I told Brent that, and his response was, “Whatever. Not cleaning sounds good.”

I totally refused to get out of bed this morning. Brent had to drag me out at 8:00 to drive him to work. When I got back home, I felt like I should do yoga, because it was now or never. This afternoon I’m at the animal shelter, and then out to dinner, and yoga after wine sounds like a disaster to me. I managed to do the 20 minute Morning Flow. I felt invigorated afterward, for the most part, so I’m glad I did it.

Breakfast was my current favorite bowl of oatmeal: Banana Date Coconut. Yum! Along with some chocolate caramel chai tea with milk and honey.

Fridays at my work are “Popcorn Fridays!” There’s an actual popcorn machine, and our vice-presidents walk along the cubicles offering bags of popcorn. I usually eat one three, but I’m hoping the anticipation of our fun dinner out will allow me to avoid such a fate today.

Anyone else have any exciting plans for tonight or the rest of the weekend?

I’ve been feeling so lethargic lately, despite sleeping a decent amount. While I’m sure general stress is a contributing factor, I also feel like my diet is really playing a role. I don’t think I eat poorly per say, but lately it has definitely lacked balance. My work schedule, while not heavy, is awkward, and so I don’t really have an actual lunch. Thus, I often get too hungry and come home and eat a lot of PB&J. I just think I’ve been eating way too many (very delicious) carbs.

I thought I’d use the blog as a food diary for a bit, maybe a week or so, or maybe I’ll get tired of it and won’t even finish today’s. I really need to reduce the bread consumption, (it pains me to say that), and increase the veggies.

Here goes. Breakfast was oatmeal, which I know I’ve claimed not to like, but it’s cheap and warm, which is helpful, so I’ve kind of become an oatmeal convert. In this morning’s oatmeal was a chopped banana, the last of a carton of strawberries, and a small handful of blueberries. I topped the bowl with a sprinkling of walnuts. 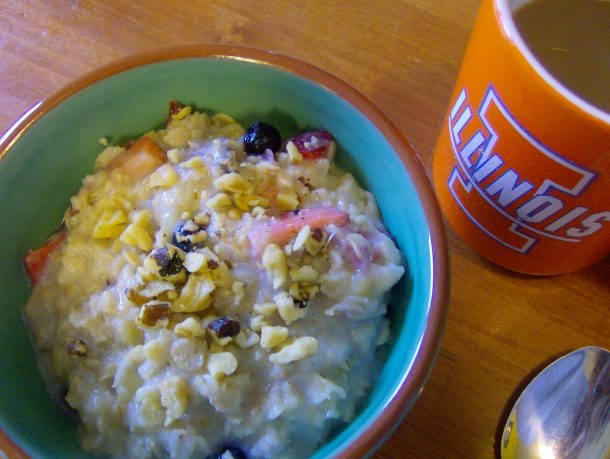 With the oatmeal was my daily caffeine fix, in the form of coffee with skim milk and a teaspoon of sugar.

The other day my mom called and said to me, “Guess what Vic? You’ll never believe it! I tried your oatmeal with bananas and flaxseed, and it was actually not bad!” (my mom is kind of the queen of backhanded compliments). Understandably this confused me a bit, because I certainly did not invent oatmeal, or even the idea of adding bananas to it, but then she went on to tell me that she got the recipe from the cookbook I made her (for her birthday in April 2008!) I’m glad she’s finally using it! So, I guess my mom is an oatmeal convert as well.