Have I mentioned my love for Artisan Bread in the last 24 hours? It is awesome. So awesome in fact, that I chose to review it for my latest English paper. We had to “evaluate” a product, and why not do something I found at least somewhat interesting right? So I’m “testing” recipes to make sure they’re clear and easy to follow. As if I needed a reason to make bread. I feel like every time I skim through this book, another recipe catches my eye, as if I hadn’t noticed it before. Chocolate Bread? Granola Bread? (I do have 10 cups of homemade granola handy…) Spinach Feta. Oh man, I just need to work (By work I mean bake and eat) my way through this whole book! Next up was the Deli-Style Rye, a request from Brent. 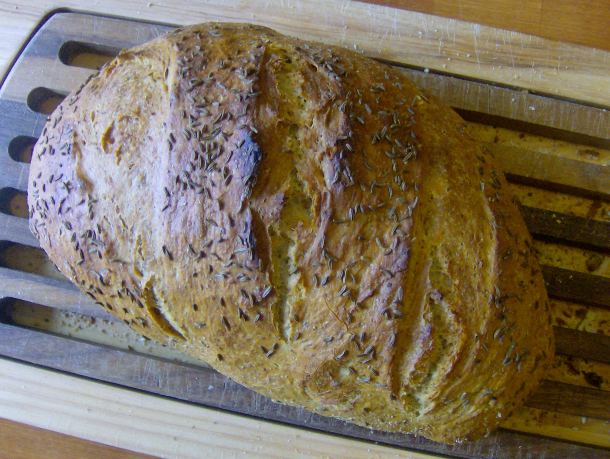 This was my best crust to date! It literally crackled! Ahhh, I’m smiling just typing this. As I was cutting my second third slice, Brent gave me the ol’ eyeroll and said, “Man, you really like bread, huh? Like really like it.” Duh, Brent. Obviously the bread is fantastic, but you already knew that, because people don’t lavishly praise mediocre bread.

Alright, gotta go back to my paper, and some HOUSE — love this show!

P.S. I really want to make the Granola Bread, but Brent shook his head, “It sounds weird, hun.” Anyone who has the book make it?

Posted in Uncategorized and tagged Bread, Rye. Bookmark the permalink.

It’s not even 2 yet and I feel like I’ve had a full day! We were up at 6ish… by a “up” a mean a zombie-like state that allowed me enough energy to make toast and that’s about it. After dropping Brent off, I swung by the gym for a full body strength work out, actually doing core work this time instead of just loftily thinking about it. After showering and destinkifying, I had breakfast #2 and went to work, then ran to the post office to mail stuff (I’ve become addicted to selling my old stuff on Half.com), and now I’m finally eating lunch.

Lunch, however, is not the subject of this post (super boring leftovers from last night – but totally even more tasty the next day).

This afternoon I present to you: Light Rye Bread. The “Light” refers to the fact that flavor of the rye is subtle, not that this bread is white or some chemically altered calorie-less “diet food.”

I used my Molasses Seed Bread as the inspiration for this bread. I actually just wanted the seed bread, but I had no sunflower seeds, and I wanted a 100% whole grain bread. The recipe is the same, except I left out the sunflower seeds and sesame seeds, upped the molasses to 2 tablespoons and used whole grain rye flour in place of the all purpose. I really kneaded the crap out of this bread! I have found in my limited admittedly limited experience with rye breads that the rye flour really benefits from additional kneading to prevent the bread from turning out super dense.

Off to study some microbes. See you later for a super quick dinner before class.

Posted in Uncategorized and tagged Bread, Rye. Bookmark the permalink.

Lame title I know, but moving on… This bread recipe is “Roberta’s Sourdough Rye” from The Laurel’s Kitchen Bread Book, and the starter is from the same book. Last night in preparation for today’s sourdough festivities I combined 3/4 cup of my starter with 1.5 cups of flour and 3/4 cup water and left it to ferment overnight.

This morning I added the rest of the ingredients: yeast, more flour, more water, salt and caraway seeds. I kneaded the dough for quite a while. It was extremely stiff so I had the Kitchen Aid mixer do a lot of it. After rising and deflating, I began shaping:

I rolled the dough flat to get the gas out of it, then I began rounding it by folding the sides inward:

Then I just flipped it over and made sure all the folds  were tucked underneath for the final rising:

I made one hearth style round and then one loaf for sandwiches. I slashed each before putting into the oven. They baked in the oven with boiling water on the bottom to help steam them and create a good crust: 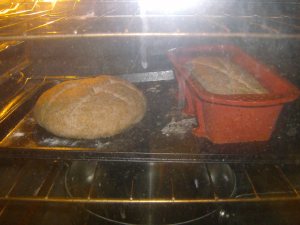 After the bread came out, I let them cool on a wire rack before trying a slice:

It was chewy but not too dense. 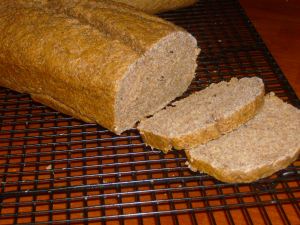 I tried a slice warm with some earth balance and I thought the flavor was great. I think the rye flavor was more apparent than the sourdough, but the sour flavor definitely came through, especially in the aftertaste. The dough didn’t rise as much as I thought it would have, so I think next time I would make this same amount of dough into 1 larger loaf. The flour was a mix of whole grain rye and stone-ground whole wheat. We’re going to be eating this all week long as sandwiches for lunch.

Bacon gets a friend, Mr. Egg 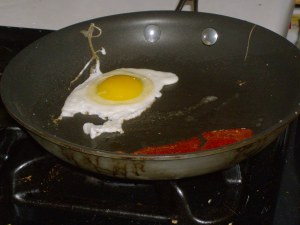 Flip it, Flip it Good

P.S. the lemon cake still tastes great today. I actually think the flavor got better the next day.