Wow, this summer is flying by. We’re almost half way through it! I only have 4 more weeks of summer classes and only 1 month until my 25th birthday! I’ll admit I haven’t been feeling my best this summer. I’ve struggled with school, and the loss of my grandmothers, and stress about what will happen when I eventually do graduate. All that has added up to feeling overwhelmed and kind of retreating into a little black hole of eating pizza and taking to bed when feeling stressed (which is all the time).

But here’s the thing — the next month is going to fly by regardless and I need to stop using feeling busy and stressed as an excuse not to treat myself well. So I’ve decided to set some goals with myself. Take the extra 15 minutes a day to make myself food that makes me feel good about myself. Use my workouts as a stress-reliever rather than zoning out in front of the TV. Realize I don’t need to make any decisions yet and just concentrate on finishing my summer semester strong. Hopefully I’ll actually more things to blog about too!

I did manage to make delicious and healthy food this weekend, and last week. Here are some of my favorites:

Hummus, tuna, and veggie wrap — I am obsessed with wraps right now.

I’m going to finish watching Last Comic Standing and then get to bed. I hope everyone enjoyed the holiday weekend!

I cannot fully express how much I enjoyed tonight’s dinner! With 80 degree weather upon us, I was in need of something that would be refreshing. I can’t stand eating super hot or heavy meals when it is this warm outside. I made a Tuna Nicoise Salad and it definitely hit the spot. 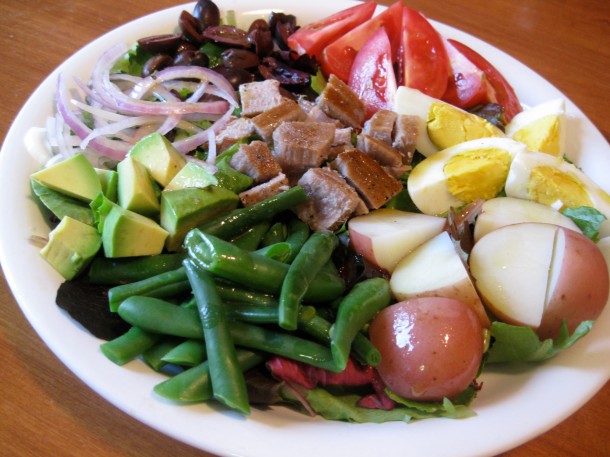 Yep, I was pretty much in love with this salad. I’ll probably make it again next week, because that’s how I roll. If I like something, I just keep making it until I get sick of it. Now it’s back to studying….

Posted in Uncategorized and tagged Salad, tuna. Bookmark the permalink.

I’ve been cooking, but not posting about it. Here are some reviews of recent meals. Last week I made Bok Choy and Rice Noodle Soup with Turkey Meatballs. Sounds good right? And the picture in the cookbook was pretty convincing too. The ingredients smelled wonderful and I was convinced it would be one of the best meals I’ve made at home. Ehhh, not so much.

It didn’t taste bad. It just didn’t really taste like anything. I liked the idea of making the turkey meatballs with some tofu as well, but those just feel completely apart. They definitely needed some type of binder. It was definitely a disappointment. I can’t really recommend it. They can’t all be the best meal ever, I guess.

Earlier this week I made a Tuna Casserole from Rachael Ray. I rarely make tuna casserole and this one sounded like it could be a winner – lots of spinach and no cream of whatever soup. The only change I made to the recipe was to use vegetable broth in place of the chicken broth.

The recipe made a ton, but I decided I might as well make the whole thing and hope the leftovers would be good. It came out pretty well. While I was making it, I told Brent it looked more like spinach casserole. I loved the combo of the tuna, creamy cannellini beans and tuna. And anytime I can throw this much veg into a single dish, I’m pretty happy. 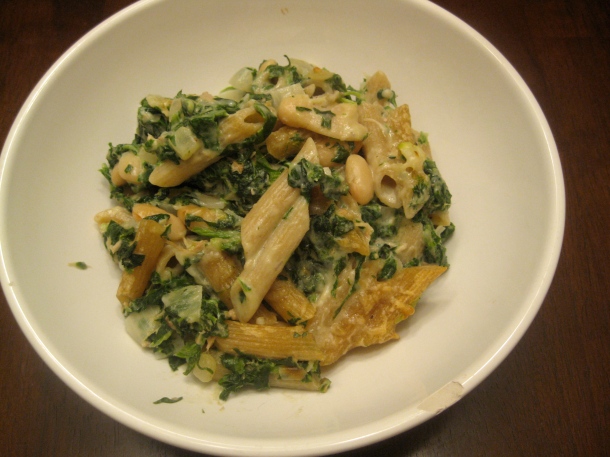 Brent commented that he could do without the beans, but I really liked them. We’ve eaten the leftovers, which were pretty good as well. I think I would definitely make this recipe again.

Today was my last day of clinical for the semester, so afterwards my clinical group had a potluck (so much food!!) and finally got a group photo after putting in a full day.

Only two more days of school! I’m already making lists of things to clean and things to cook over break! Can’t wait!